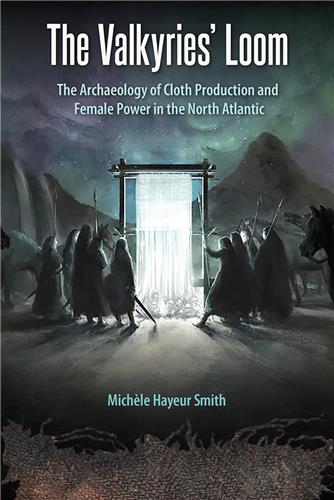 Welcome to December and the ‘most wonderful time of the year’. Thank you to everyone who has read and followed the blog since its inception in August. I really do appreciate that so many people are interested in early medieval (and other periods) textiles in all their forms and uses. The sharing of knowledge and enthusiasm were, as you know, two of the reasons the blog was established.

Looking forward to 2021, I have 12 fantastic blogs lined up, which I know you’ll enjoy. So have a fantastic end of year, however you celebrate it, and here’s to a great 2021!

In our final post of 2020, Michèle Hayeur Smith gives us her insights into her new book, The Valkyries’s Loom: The Archaeology of Cloth Production and Female Power in the North Atlantic, which has just been published.

Michèle Hayeur Smith is an anthropological archaeologist working predominantly in the Norse colonies of the North Atlantic regions on issues of gender, identity, ethnicity, and cultural contact, which she is examining through a focus on material culture, textiles, dress, and the body. She is currently a Research Associate at the Haffenreffer Museum of Anthropology, at Brown University, in Providence, RI, USA, where her projects focus on the roles of men and women in Norse societies of the North Atlantic during the Viking age, medieval and early modern period through the production of textiles.

Her book:  The Valkyries’s Loom: The Archaeology of Cloth Production and Female Power in the North Atlantic, University Press Florida (Hardcover ISBN 13: 9780813066622 -Details: 236 pages, 6×9), was published on November 3rd 2020, and comes out of archaeological research undertaken from 2010-2019 on a vast corpus of archaeologically recovered textiles from the Viking Age (c. 750-1050), Medieval (c. 1050-1550), and Early Modern (c. 1550-1800) periods in the national museums of Iceland, Greenland, Denmark, the Faroe Islands and Scotland. Many of these textiles, ranging from fragments to complete garments, were recovered during excavations over the past century, or from current or on-going excavations, and some had never been analysed as complete corpuses, nor compared on a pan- North Atlantic level.

Three major grants from the U.S. National Science Foundation’s Arctic Social Science Program (“Rags to Riches, an Archaeological Study of Textiles and Gender in Iceland 874-1800” (Award no:1023167), “Weaving Islands of Cloth, Gender, Textiles, and Trade across the North Atlantic, from the Viking Age to the Early Modern Period” (Award no: 1303898); “Archaeological Investigations of the Eastern North Atlantic Trade and Globalizing Economic Systems” (Award no. 1733914), allowed her to analyse this massive corpus coherently, permitting her to see patterns of change and continuity that would not have been apparent had the analysis been focused on just one or a few sites, or even just on the collections from one country. The analysis includes information on nearly 10,000 fragments from Iceland, as well as comparably diverse but smaller suites of archaeologically recovered textiles from the Faroe Islands, Norse Greenland, northern Scotland. This 1000-year examination of textiles as primary evidence for women’s labour and roles in the Norse colonies that expanded from Scandinavia across the North Atlantic in the 9th century AD, focuses on women’s roles in international trade, in the development of national identities through the transformation of cloth into clothing, and into the ways women developed sustainable solutions to climate change by adjusting and re-engineering clothes that contributed to the survival of all but one of the Norse settlements during the Little Ice Age.

Her research brings Icelandic and North Atlantic Norse women and women’s work to the forefront in North Atlantic research, using them as a model for reintroducing women into archaeological research programs across the North, and contributes to global discussions about the hidden roles of women in traditional societies and their roles in guiding change and preserving tradition. By documenting and analysing women’s roles and women’s involvement in textile production, it also established the foundations for a gendered archaeology of the North Atlantic. Something that has never been attempted before.

In Iceland, and to a lesser degree in the other islands of the North Atlantic, textiles were used as the main unit of currency throughout the medieval period. In addition, they were traded overseas for goods that islanders needed and provided the clothing, sails, and tents used to tame environments on land and sea.

In these societies, men took no part in textile production after the sheep were shorn and until the cloth was released as a commodity to be legally evaluated and exchanged. Quite literally “weaving wealth” in their homes, in Iceland, women and their work lay at the heart of the North Atlantic economy and the degrees of freedom and political power that women enjoyed in these societies, relative to other parts of medieval Europe, must be seen in relation to this central role in the economic structure. In this system, all cloth was woven in the household on the archaic warp-weighted loom, which is remarkable in itself, as the North Atlantic region (especially Iceland) resisted tides of technological change that swept through Europe in the early Middle Ages, when weaving technologies evolved to include the flat loom and the spinning wheel. In the North Atlantic, these transformations were resisted until the 18th century, when Danish colonial administrators introduced these “new” (to them) technologies to Iceland and the Faroe Islands in a conscious effort to “modernize” production and integrate the North Atlantic nations into the industrialised world – despite these islands having been engaged in the textile trade for centuries.

This Early Modern transformation in weaving technologies changed the gender dynamic of weaving and the roles of women in the economic lives of the North Atlantic islands forever. With the creation of weaving factories, in which men were employed to run the new looms and spinning wheels, weaving tasks were removed from the hands of women, who spun and wove in their homes for centuries, and instead placed these tasks into the hands of men, working in factories.

Over the past decades, many books have been written on textiles. Few of these have focused on the North Atlantic region and most that have – such as “Woven into the Earth”, Else Østergård’s excellent analysis of medieval Greenlandic textiles – focus on technical descriptions of ancient textiles from a narrow slice of time, without exploring their roles textiles played within society or the people behind them.

This book is not a “technical textile book”, but rather one that uses textiles, in their social and archaeological contexts, to explore social and cultural perspectives on gender, society, and economy in the North. By focusing on cloth – its production, distribution, valuation, meanings, and social uses – it provides a new perspective on the development of the Norse North Atlantic colonies over a thousand-year period, and new perspectives on women’s lives and roles in this seemingly remote part of Europe.

While some of the data has already been explored in peer-reviewed articles and chapters, this book brings these threads, re-examined, together with new data and new constructs to offer unique glimpses into data sets that are both unknown and understudied. To recapitulate, I have not written an empirical study of textiles but rather a social one exploring the use of textiles, and the roles of women, in the medieval and early modern societies of the North Atlantic.

I would like to thank Michèle for telling us about her book. It’s on my Christmas wish list and I can’t wait to get my hands on a copy!

Next month we kick off 2021 with Celia Elliott-Minty, who will be discussing Tablet-weaving – where twining and weaving meet.

1998       A Review of Viking-Age Textiles and Fibers from Scotland: an Interim Report. In Textiles in European Archaeology: Report from the 6th NESAT Symposium, 7-11th May 1996 in Borås. GOTARC, edited by L. Bender Jørgensen and R. Christina. Series A, Vol. 1. Göteborg University Department of Archaeology. Göteborg, pp.176-185.

1999       Textile, Yarn and Fiber from the Biggings, In The Biggings, Papa Stour Shetland: The History and Excavation of a Royal Norwegian Farm. Edited by B.E. Crawford and B. Ballin Smith, Society of Antiquaries of Scotland, pp. 194-202.

1998       The Raw Materials of Textiles from GUS- with a note on fragments of fleece and animal pelts from the same site, in Man Culture and Environment in Ancient Greenland Report on a Research Programme. Edited by J. Arneborg and H.C. Gulløv, Dansk Polar Center, pp.66-73