Welcome to this month’s Early Medieval (mostly) Textiles blog post. I am really pleased to be able to bring you a post by Fara Otterbeck, who is discussing her work and findings when making and using replicas of a Viking Age (900 – 950 CE) silk cap discovered in excavations at 16 – 22 Coppergate, York, UK.

Fara Otterbeck specializes in experimental archeology, focusing on how humans of the past interacted with bodily fluids. She is a retired political risk analyst, and a retired farmer from Northern California. At the moment she is interning with Erin Harvey Moody and Christy Gordon Baty at Relics in Situ but she is poised to enter the graduate archeology programme at Durham University in the UK.  Fara grew up exploring old ghost towns with her relatives, who also mapped the area for the Forestry Service. She began sewing as a preschooler, and napped flint by the time she was six. For the last 20 years, she has recreated items that use bodily fluids and blurted out her findings to anyone who would pay attention.

“I study the medieval uses of bodily fluids. It is sometimes difficult to get students engaged with how medieval people used bodily fluids in the course of their daily life. There was a more intimate relationship between past peoples and their environment and sewing is an excellent example of our unconscious use of bodily fluids. One of my favorite pieces to demonstrate this relationship are reproductions of the Viking hat from 16-22 Coppergate, York. Students usually understand and relate to putting thread in their mouth before threading a needle. 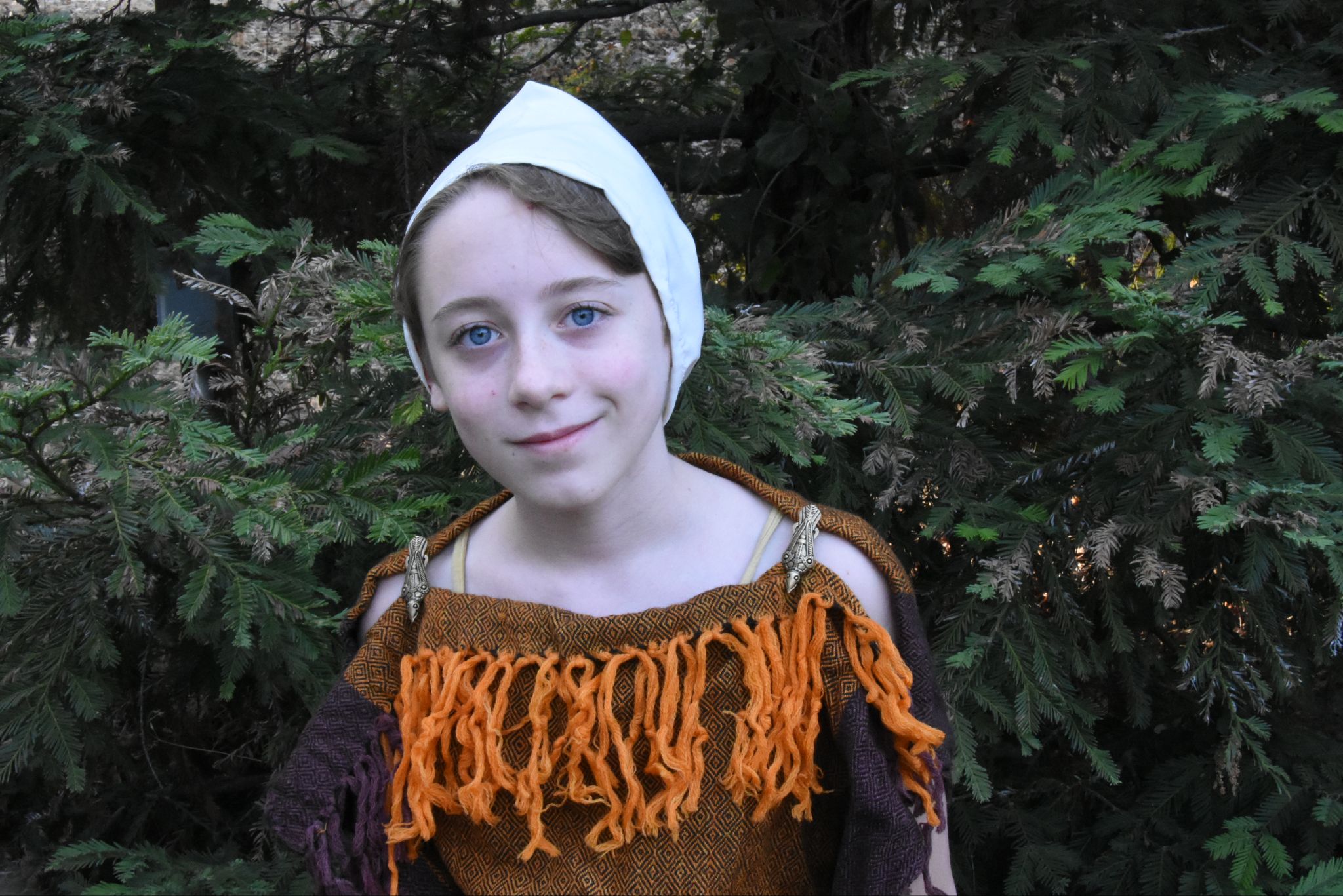 Our model, Chris, is an 11 year old North American girl. She is 140 centimeters tall.

Caps that cover the head and tie at the nape of the neck, or perhaps under the chin, have been popular for centuries. The silk cap from Coppergate is probably the most intact and oldest example found so far. The cap was found at 16-22 Coppergate between 1978 and 1981, and Penelope Walton (now Walton Rogers) wrote a detailed analysis of the find in her 1989 publication, Textiles, Cordage and Raw Fibre from 16-22 Coppergate.

Experimental work has shown that this particular pattern, made in linen or silk, tends to stay in place while doing heavy labor such as farm work.

These caps are incredibly useful. They protect hair from dirt, biting insects, and the sun.  They are secure in most weather conditions, including very windy days. Daily use of the items is part of the educational process for experimental archeology. This works out small glitches with patterning and stitches.

At this time I owned a small farm, and decided to test recreations of clothing. I chose the Coppergate silk cap as my primary headwear because I wanted to see how it performed in the field. I created 6 copies of these fine caps with the same layout, but fitted to my head. I wore the clothing while doing normal agricultural chores such as weeding, milking, cleaning barns, pruning trees, digging ditches, and feeding animals. Two were in silk. I could not find silk with a similar SI pattern to that in the extant silk cap; one of the reproductions used raw silk, and the other used dupioni. The four other caps were created in linen.

I found the raw silk and dupioni tended to stay firmly on my head during regular farm chores. Ties and pins were not needed through most of the chores, and in most weather. The silk caps stayed firmly on my head, without ties, except when the wind was prone to gusts. The cap encloses hair at the nape of the neck when tied, and is excellent protection in strong winds. 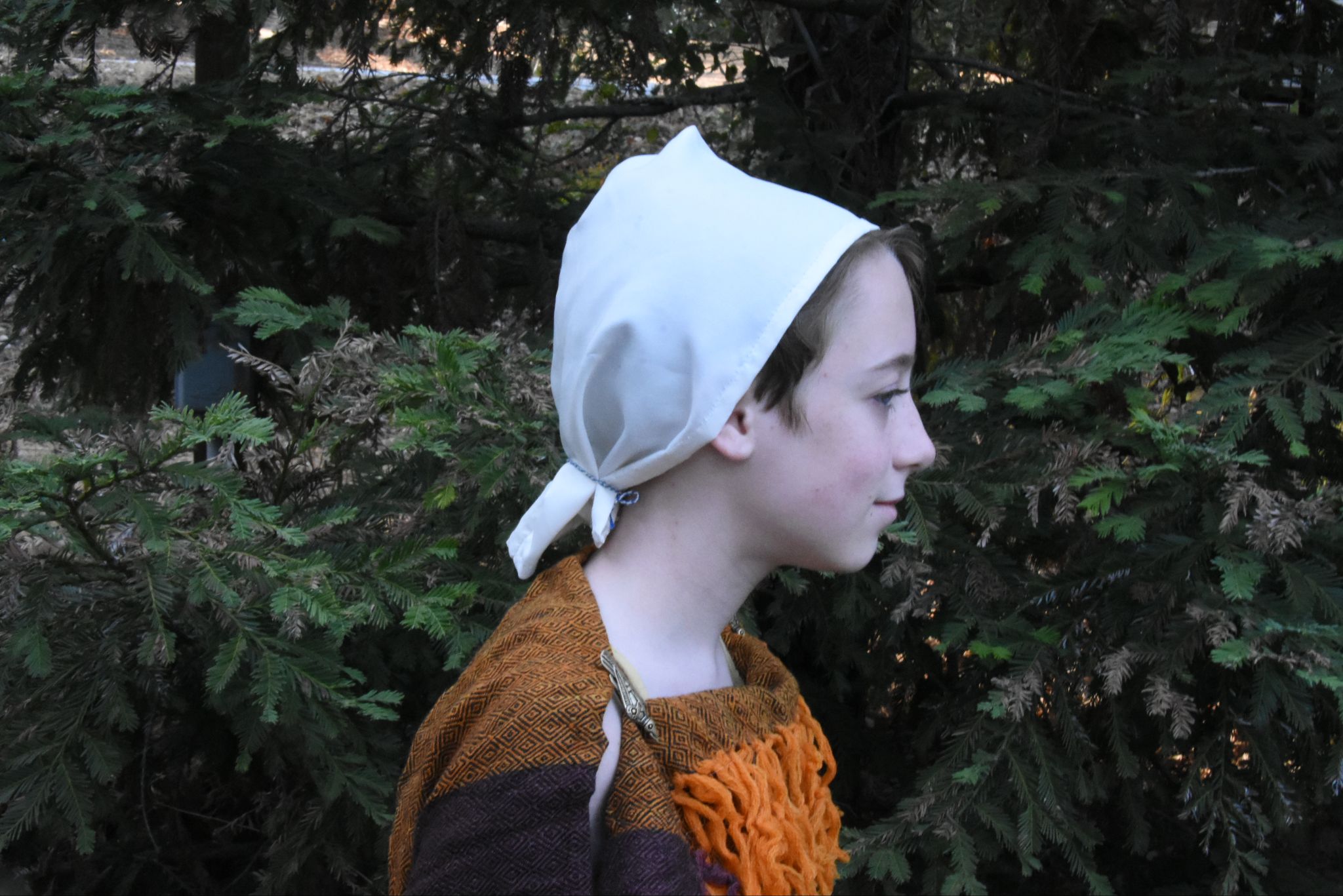 The cap was extraordinarily comfortable, and functioned far better than a scarf would. The cap was good protection against ticks and fleas with the silk caps performing far better than the linen caps.  Mosquitoes tended to avoid the silk caps but were unhindered by the linen. It was not tested against lice. The caps kept braided hair very clean for up to 6 days at a time, with regular farmwork. Braiding hair and using a cap for heavy farmwork did keep the hair feeling clean.

In 2021, I still have the raw silk cap. The dupioni cap and one of the linen caps were lost. The remaining linen caps decayed over a few years of steady use; the fabric frayed apart during wear. The quick decay of the linen is an important side note. Linen wears out during wear, and not just when it is buried. The radiography of charred remains at Coppergate and other sites indicates that many garments were burned.

This type of cap is a frugal use of fabric. The textile of the cap is still a fine silk and still has its luster. The cap and a similar fragment were found near the front four tenements, along with some food debris that would be associated with a more affluent household. Due to this affluent environment, the use of metal needles was a possibility.

I saw the cap at the Yorkshire Museum in 2017 and 2018. I noticed the fabric luster from a distance. The original cap was made from silk from Iran. The silk in the original cap is very well preserved. The stitching and construction are straightforward.

For this latest reproduction, I used a vintage piece of silk that was said to be brought to the United States from Iran in the mid 1970s. The fabric feels like a very heavy Shantung and is machine woven. It has the stiffness and gorgeous drape of good Shantung, but is heavier than any I have encountered. The thread count is slightly off compared to the original cap and the reconstruction fabric has a little more twist to the thread. The sewing thread for this project was a commercially available silk thread.  Walton Rodgers suggested linen thread was originally used, but I found it difficult to find a linen sewing thread that did not break during the construction process. 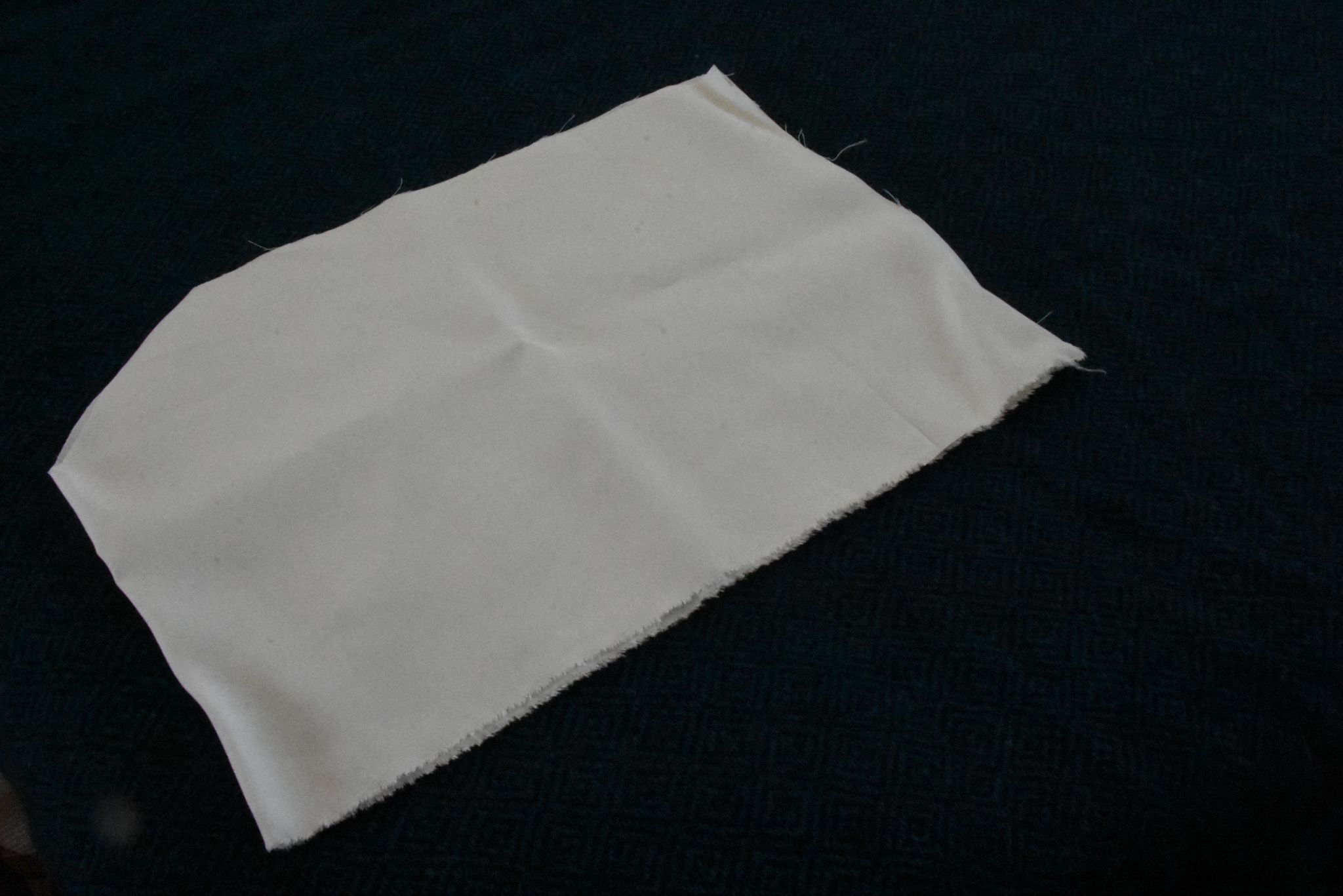 I struggled with the evenness of my stitches on silk and I struggled to keep my stitches as small as possible with the preproduced needles. I regularly use bone and metal needles on wool and linen with much neater outcomes. Photos of the cap show the original seam is particularly straight, which might indicate the item was constructed by a person with experience working on these tools.  I used the selvedge edge of the reproduction fabric to create the front seam of the cap. 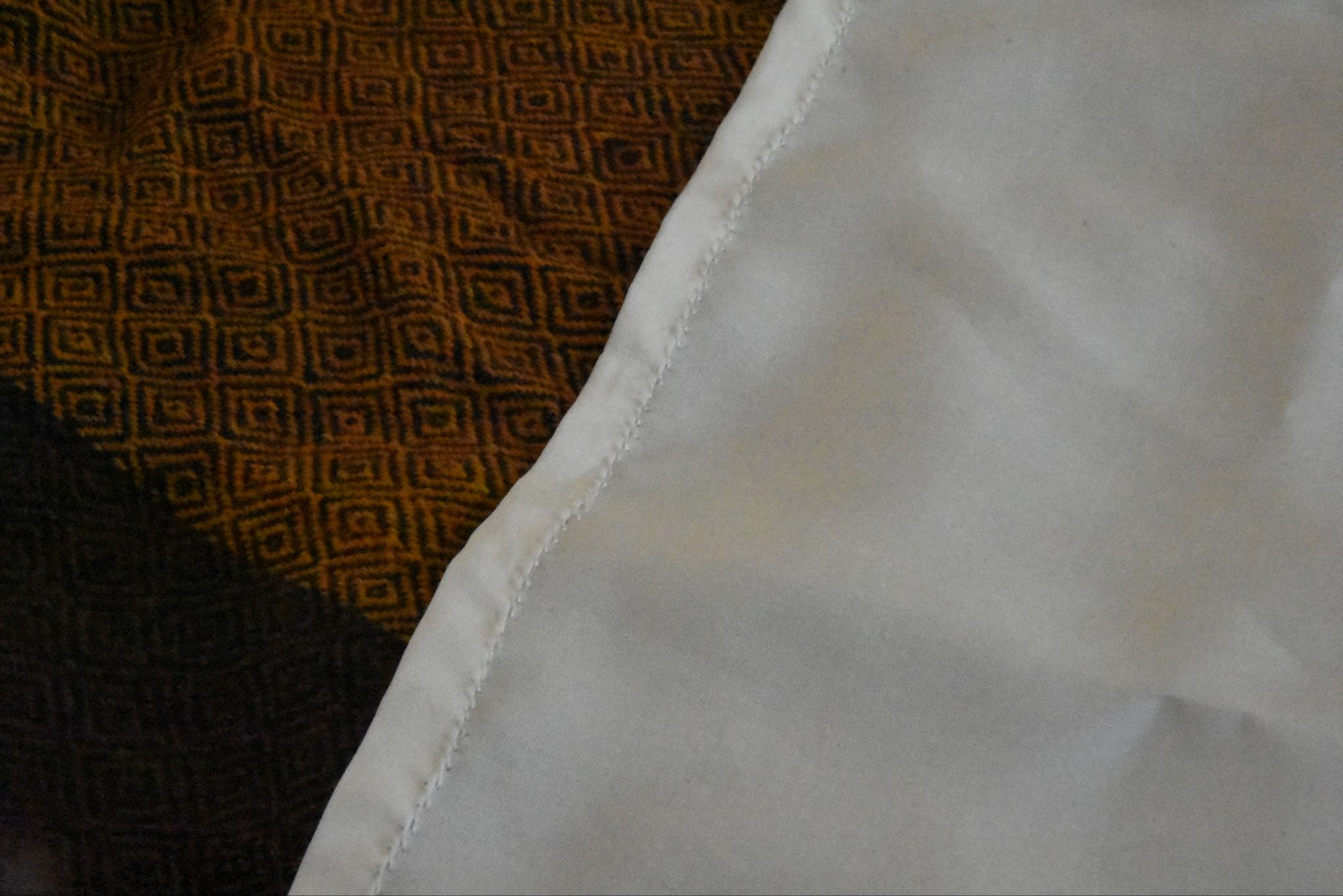 The original cap was hemmed and then constructed. This is an important step in creating a lasting garment from handwoven textiles. The fabric has to be locked in place to prevent fraying. In the extant hat, this was done by folding it over a tiny hem. The garment is assembled by using an overhand stitch to bind the hemmed edges together. This is a simple and fast way to prevent the handwoven fabric unraveling. The extant fibers are long, and unbroken. It has the characteristics of farmed, degummed silk, which is less likely to unravel, but it is doubtful the original owner would take the risk in not preventing fraying. The hat is patched in two spots, which indicates it was treasured. 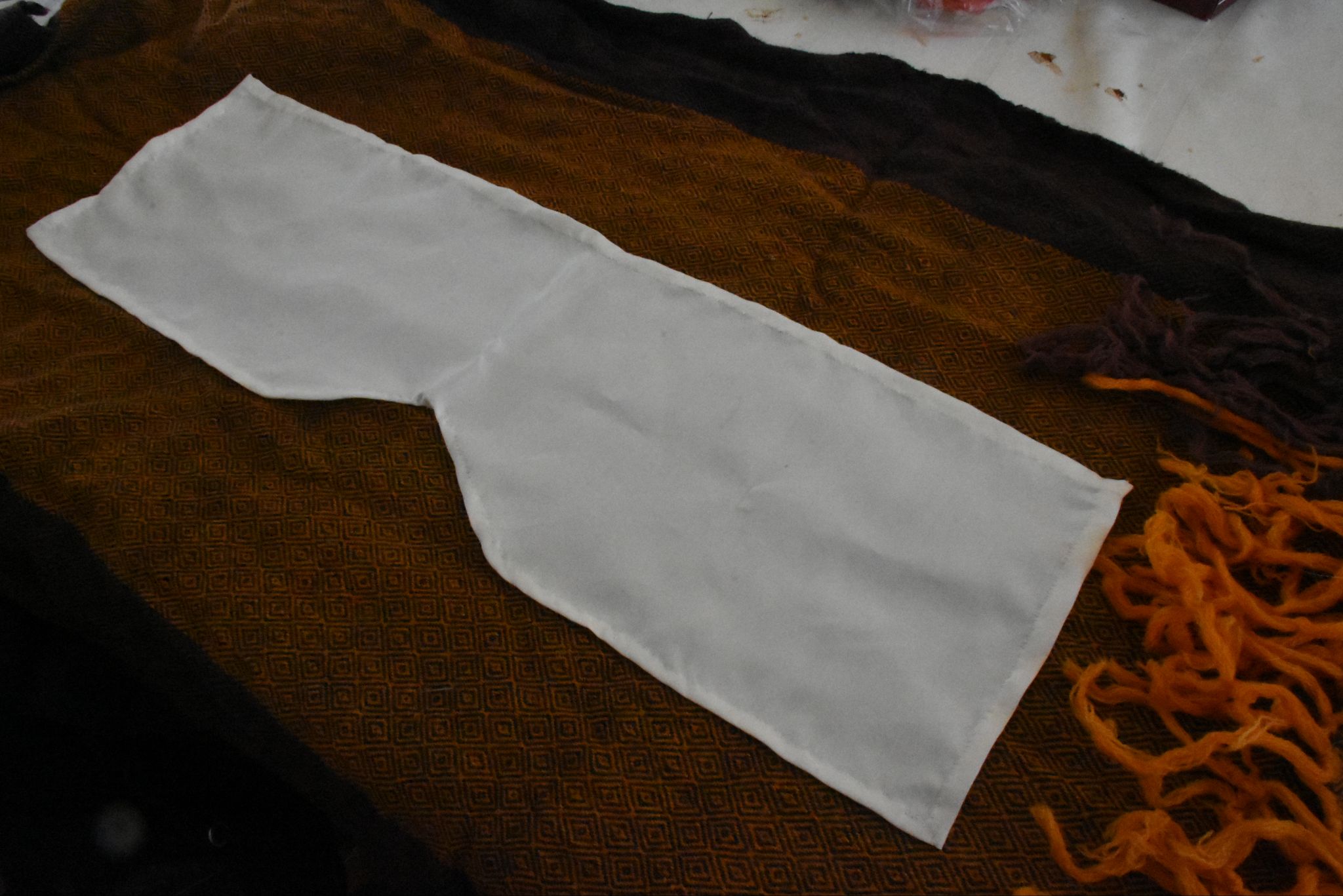 I chose to use reproductions of medieval needles. I had 8 bone needles, and four copper alloy needles. Each needle was the size of a modern number 20 tapestry needle, but with a smaller eye. The needles tend to be blunt tipped. I sharpened the needles as I worked, which did help with the silk. The reproductions are easy to use on wool and linens. Bone is a bit easier to use on wool, and metal needles are better for piercing the thread.

My original hypothesis was that metal needles were more likely to be the tool of choice for the original tailor. In an amazing display of firm tension in my stitches, I broke every single needle. Most of the needles broke, or split, around the eye. This could be my stitch tension, or the use of a handmade needle with a machine made fabric. It may also be as a result of needle technology. There may be undocumented tricks to creating a better needle, for example a bone needle may have to be split or treated in a way that was not written down, but was common knowledge at the time.

I laid out the silk and used Walton Roger’s pattern. I used the same measurements, and added a 1cm seam allowance (this is probably not enough, as the final seams on the original appear to be slightly larger). The entire piece was stitched around the perimeter in an overcast stitch. I also used an overcast stitch to create a dart at the top, and bring the two back hems together in a butted seam. The original tie was not found with the hat but Walton speculated that it was a woven ribbon. It may have been repaired, along with a section of the back of the cap, and the top. I used a small bit of finger-loop braided cord to create the tie for this cap. 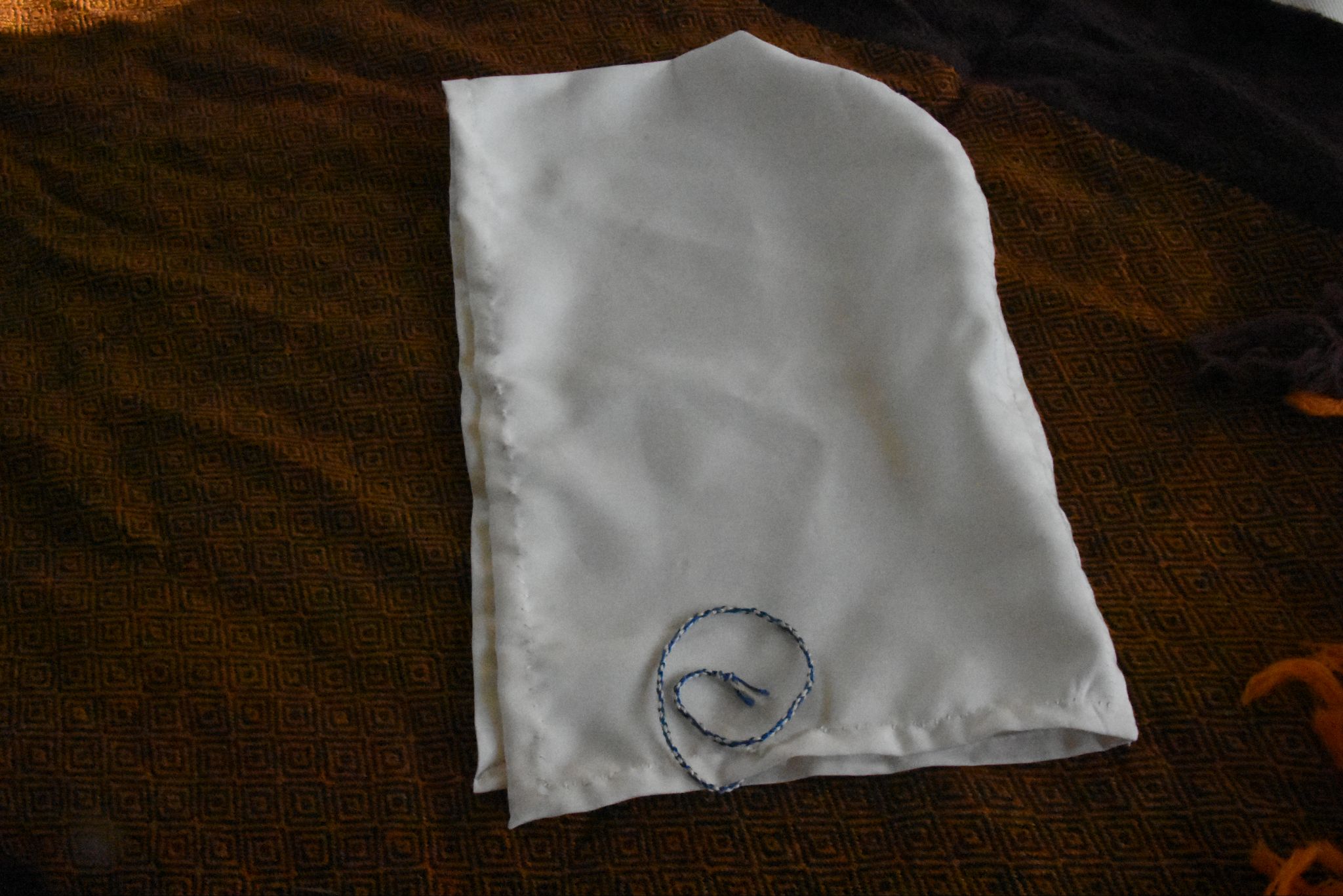 Finished cap, side view. Back seam, with the two edges butted together. 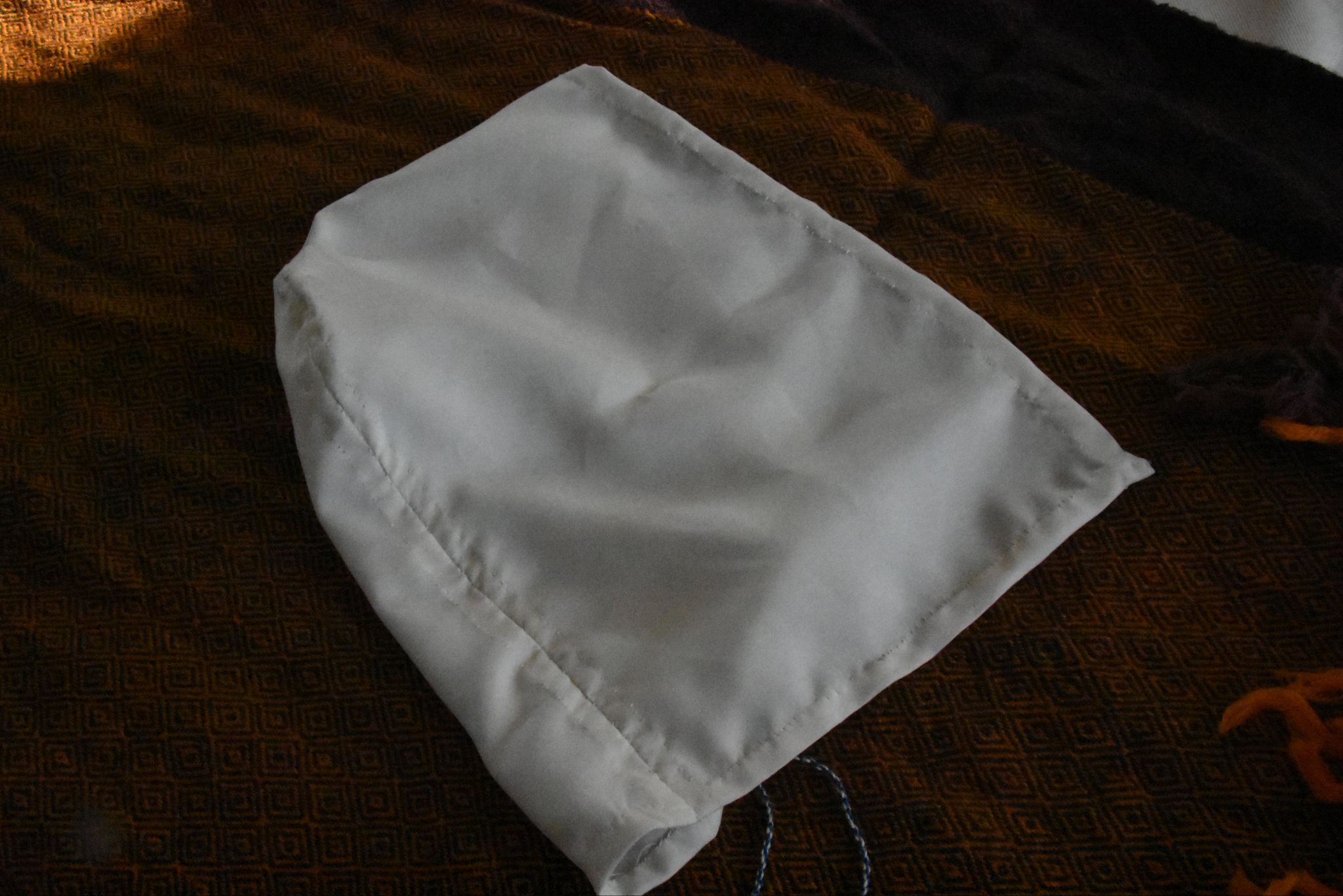 View of the back, with the seam turned towards the camera. 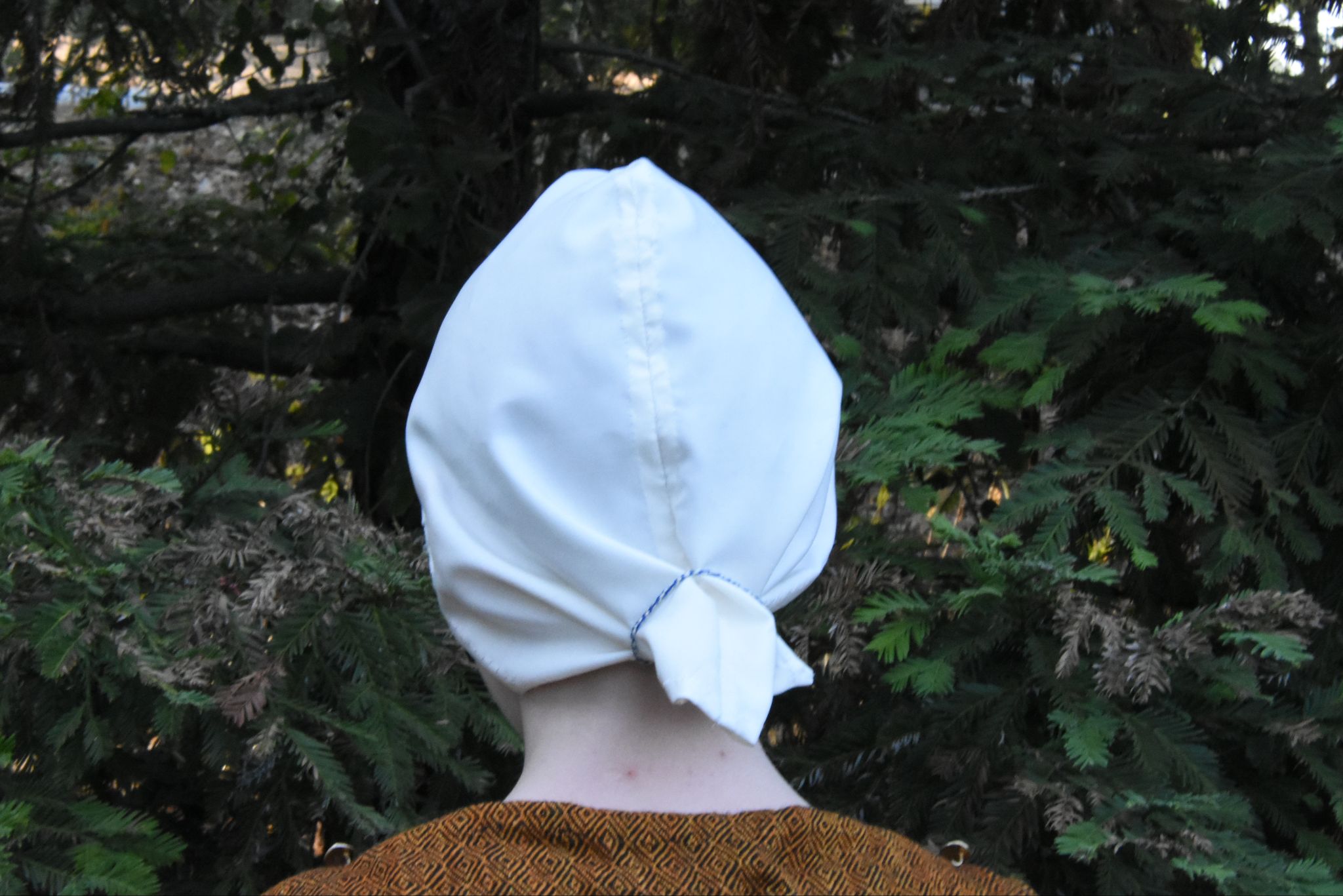 A view from the back, with the cord over hand wrapped around the garment. There are a few ways to tie the cap. Some methods work better in hot weather, and some are better in the wind. It is versatile and the finished look is soft.

There is no way to determine with today’s technology if a bone or metal needle was used. In this experiment, the burrs on the bone needle chewed up the expensive fabric and they were abandoned a few centimeters after starting the project. If the original creator was affluent enough to afford the silk fabric, there is a very good likelihood that metal needles were available and used. Metal needles might almost need to be used for sewing silk fabric. While silk can be sewn with a bone needle, a metal alloy one will speed construction. The stitching method and measurements were kept as close as possible to the original, and it lends a softness to the cap. Our model is probably very close in height and stature to a young adolescent female of the time.”

I want to thank Fara for this fantastic insight into what we can learn when we recreate and use archaeological and historical garments and textile equipment. This is really important for of research and our understanding of how and why garments appear as they do. You can also read more the original cap at: https://www.yorkmuseumstrust.org.uk/collections/search/item/id=7495&search_query=c2VhcmNoX3RleHQ9c2lsaytjYXA%3D

Next month Marquita Volken will be sharing her work and insights analysing and researching leather objects.

Kenward, HK and Hall, AR. Biological Evidence from Anglo-Scandinavian Deposits at 16-22 Coppergate. York [England] :Published for the York Archaeological Trust by the Council for British Archaeology, 1995.